Latest News
VIDEO – Hauser plays theme tune to Gladiator in Dubrovnik: Stjepan Hauser alone with his cello in o
Spending just a day in nature cleansed me more than any spa centre: There’s just something about getti
Fiscal and monetary measures should mitigate the effects of the corona crisis - Standard & Poor's on Croatian economy: On Friday, Standard & Poor's reaffir
Our top five "Start the weekend in colour" Dubrovnik Instagram photos: Dubrovnik is a photographer’s drea
Coronavirus Croatia – 212 new cases of Covid-19 in Croatia - 11 make full recovery: In the last 24 hours, 212 new cases of C 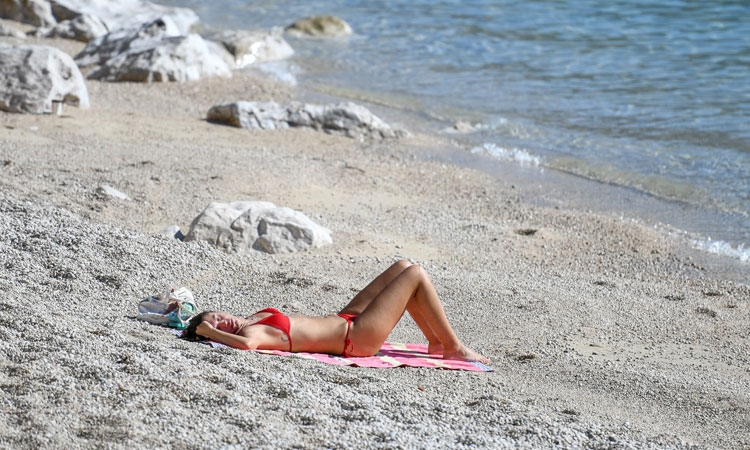 Time to top up the tan Tonci Plazibat - HANZA MEDIA

The never-ending summer in Dubrovnik is continuing in fine style as November is almost on the doorstep and yet temperatures are still very much like August. Yesterday in some parts of the Dubrovnik-Neretva County temperatures reached a mercury-busting 29 degrees! And Dubrovnik bathed in temperatures around 26 degrees with thousands of tourists taking advantage of the Indian Summer and topping up their tans or diving in the Adriatic Sea.

Even though we are into the last week of October the sea temperature in Dubrovnik measured an incredible 23 degrees yesterday, in fact the sea temperature in Dubrovnik was considerably warmer than most European capital air temperatures. It is the ideal time to visit Dubrovnik. “We are just loving this autumn sunshine,” explained an English couple from York today in Cavtat. “We certainly didn’t expect it to be just so warm, it’s like a summer’s day where we come from,” they added as they prepared to take a swim.

The warmer spell is predicted to continue all the way through to the weekend with temperatures until the end of the week expected to be in the mid-twenties. But weather forecasters have stated that by Tuesday of next week there will be a sharp drop in temperatures, by as much as ten degrees as winter starts to take a grip.

But for now the thousands of tourists who plumped on Dubrovnik as a late autumn destination are absolutely getting their money’s worth of weather and will go back home with a bronze suntan.

Temperatures tomorrow are predicted to reach 25 degrees and it will be another glorious day of blue skies and sunshine. Even the overnight temperatures are warm, with 16 degrees predicted tonight. However, these Indian Summer temperatures have also led to an outbreak of mosquitoes in the city, rarely seen at the end of October.