Latest News
INTERVIEW – Dubrovnik almost seems to perfect to be real - Hofit Golan: This week we caught up with one of the m
Great result and great victory for HDZ – Plenković: The Prime Minister and President of the
HDZ wins landslide 65 percent of diaspora vote: It wasn't only Croatian citizens that re
Ruling HDZ party romps to victory in Croatian general elections: With more than 95 percent of polling sta
Coronavirus Dubrovnik - three new cases yesterday: Yesterday in the Dubrovnik-Neretva Count

The Wizard of Oz

The cars that ate Dubrovnik

Years ago when I first came to Dubrovnik I remember how I was intrigued to see so many small buzzy motor bikes and so few new cars. Well that's certainly changed. The place is now as congested as most cities and during the tourist season the roads are often impassable. Gone are the screaming little motorbikes and they have been replaced by, remarkably, new cars.

I have never owned a new car in my life. Not because I couldn't afford one but because it is a foolproof way to lose money. While leasing a new car is like using your money to light a fire.

The B grade movie called the Cars That Ate Paris from the 1980’s has turned out to be a masterpiece as the congestion and pollution is so bad now in the world’s most liveable city that the authorities are implementing a raft of extreme measures including charging an extra tax on those with diesel cars over ten years old. They have also banned cars from sections of the road along the left bank. All over the rest of the world city administrations are having to deal with the explosion of cars and are putting in place various management strategies. These are generally drawn up by a group of professionals who go by the lofty name of Traffic Engineers. These people spend their lives looking at figures derived from surveys and try and develop models which will help reduce traffic congestion. Good stuff, if it works. Coupled with working out traffic flows they recommend other strategies to help reduce congestion. These can range from restricting the type and size of vehicles entering the centre of cities to implementing fees designed to make driving unattractive.

One of the most outrageous strategies employed by a government to restrict the number of cars in the central city area was that developed by Singapore back in the days when they had a very authoritarian regime in power. The idea was that if you had less than two people in the car you could not drive past a certain point. Now this doesn't seem unreasonable and in fact many cities have used the technique since. The difference in this Asian country was that at the designated point they had military with machine guns and if a driver went past with only themselves in the car the soldiers would shoot the ties out. Understandably this policy did not last a long time but it did work unlike policies adopted in a lot of other places including Dubrovnik.

When the tourist season starts all the problems here are compounded by the mirade of huge busses which pour people out at the Pile gate and lead to traffic jams which have an effect on the whole city. These inevitable problems faced by all tourist towns have been compounded by an explosion in the number of vehicles on the road, too many of whom are driven by deluded people who think that they are employed by a formula one race team. Or worse by people who think they are on a farm.

Of all the antics I have seen my favourite is the technique of finding a place to stop which will cause the maximum amount of chaos and then thinking its all ok because the hazard lights in the car have been turned on!

Then there is the game of Russian roulette on roundabouts where in the rest of the civilized world people use their indicators when merging - not here! Last but not least is the total lack of respect a lot of people show for other people's’ property. Thank god I didn't buy a new car when I arrived as touch parking rules and I have even been sitting in my car and had someone slam their do into the side and simply walk away.

With all this increase in vehicles have come some inexplicable traffic management initiatives which have done nothing to relieve the problems. The effort from the Zupa administration at the intersection on the highway outside the new shopping centre is the stuff of legends. For the entire tourist season last year the traffic lights were turned off creating an apolitical situation. When I made some enquires from someone who is close to the organisation I was advised that this had been done” because it made the intersection work better”. Amazing! Surely if there was a problem you would find someone who knew how to program the traffic lights to get it right.

Then there was the decision to block the direct route from Gruz to the Old Town and redirect the traffic around behind the Minceta building. This involved moving a heavily used bus stop and merging traffic coming from Lapad into that from Gruz and sending it to the Old Town. Totally unbelievable and to compound the problems caused they have broken the basic rules of traffic management by leaving the entrance to a car park and pedestrian crossings just past the corner where all the traffic merges. The only people who would be happy about this idiotic effort were the owners of real estate in the two hundred metres of road which was turned into a pedestrian strip.

Not that creating calm areas is not a great idea but they need to be used as part of a coordinated strategy. The best example of their use I have seen is in major tourist town of Santa Cruz in Tenerife where they have been used to return the centre to pedestrians and the roads left open have been narrowed and the cars forced to slow down. This all works because drivers respect the rules. In Dubrovnik, however this is not the case. Here pedestrians are an endangered species who should be given UNESCO protection. The big game with many drivers, including those who are charged with upholding the law, is to do their very best to get in front of you and onto the crossing before you arrive and then only stopping if you are lucky. The tourist session rarely goes by without a poor hapless visitor being slaughtered on a spot which is designed for their safety. 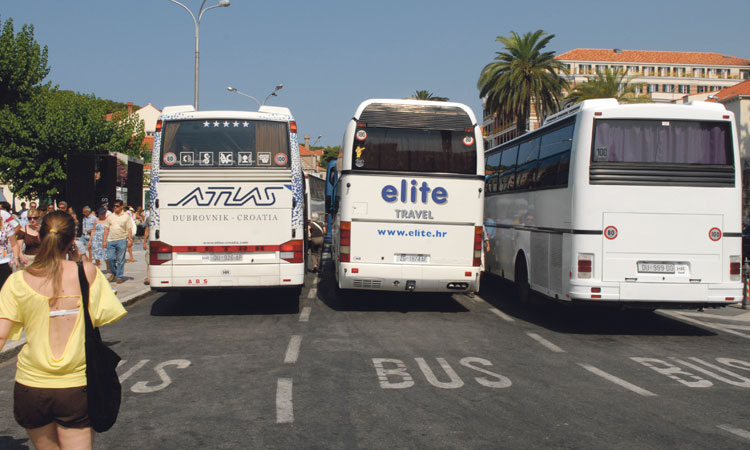 There is not much point in whinging or being hyper critical unless you can offer some solutions, so here we go - first ; the police should set an example and abide by the rules and most importantly enforce them to stop drivers from behaving with a total lack of respect for the need to make the town safer. Second; the local government should make a commitment to returning the inner areas to a pedestrian based system by slowing down and excluding vehicles. This can be achieved by letting the traffic planners do their job and not by take decisions based on some political agenda other than trying to solve traffic problems.

Third; the buses must be controlled and removed from the inner city area by the local government providing smaller shuttle buses to the two Old Town entry points. There are acres of unused concrete platforms along the harbour at Gruz all the way to the bridge on which you could park thousands of buses. Fourth; bring back the light rail which ran from Gruz (where the buses should be parked ) to the Old Town which was removed after sixty years in 1970 after it ran out of control and make sure the system is maintained to avoid another catastrophic accident.

Cities all over the world are realising the mistakes they made in removing this highly efficient method to move people around tight inner city areas. Fifth; restrict the times delivery vehicles can come into the inner city area. This was implemented in another tourist town called Honolulu and by enforcing no deliveries after 8am the traffic flow is a lot smoother. Sixth; parents should let their kids get some much needed exercise and make them walk to school instead of providing a morning and afternoon traffic problem. And dare I say it, perhaps the other people of Dubrovnik could get off their ……. and walk to the coffee shops for their hourly break from work. Seven; local government should restrict the number of car parking spaces in the inner area by moving their parking stations from around the walls of the old town to places further out which are well serviced by regular buses. This could be made free by the sale of the land the car parks currently occupy. Yes and again the people of the old town could experience the joys of walking to their cars.

These measures may not solve the problems but they will definitely help stop them getting worse. With any luck the city administrators will have received an invitation to the recent Sump Conference on traffic management which was be held in Dubrovnik where they might have learnt something.

PS The morning after I penned this story I came within centimetres of taking the final boat journey to Valhalla as I went about my business using the pedestrian crossing outside the fire station. So be very afraid if you see an ego riddled thirty something male driving a lemon yellow Renault Twingo.

The Wizard of Oz