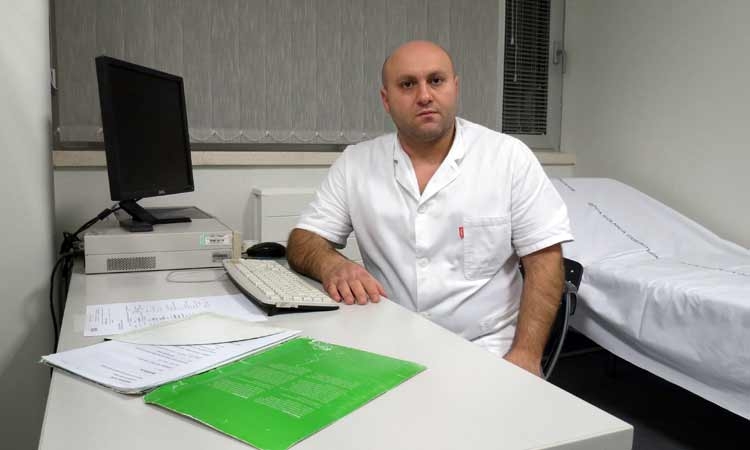 After the patron saint of Dubrovnik, St Blaise, Gor Asatryan is quite possibly only the second Armenia doctor to work in Dubrovnik. Dubrovnik is certainly an international city but to find an Armenian is rare, there is a grand total of two living in the city and they are related. Gor is very well-loved by his patients at the Dubrovnik General Hospital where he has made a name for himself as a general surgeon. A fan of Dr. House, yes he even dedicates his free time to medicine, he explains to us about his journey to Dubrovnik.

How does a doctor from Armenia end up working in Dubrovnik General Hospital?

It is difficult to explain the journey briefly. I had been to Dubrovnik on holiday for a couple of times and during my third visit I started to ask about how the hospital in Dubrovnik is organised. I should have added that my sister lives in Dubrovnik and of course she was the reason that I visited on holiday. She organised a meeting with the former director of the Dubrovnik hospital and we discussed the options of me coming to work here. It was suggested to me at that meeting that if I was interested I should specialise in general surgery. He asked me about the conditions in hospitals in Armenia and he offered me a position to work in Dubrovnik. I accepted his offer. This was back in 2008. A year later I left home and started working in Dubrovnik.

Yes, your sister was the main reason behind you discovering Dubrovnik

That’s correct. My sister is a pianist and she came to Dubrovnik to perform a concert in the Rector’s Palace. She then fell in love with the city and decided to set up home here. Now we are both living here.

What were your first impressions when you saw Dubrovnik?

Like most people my first impressions were extremely positive. When I saw the Old City for the first time I was shocked at its beauty. I think it is the most beautiful city in the world. The combination of the historic city with the glorious blue sea…well this is just the perfect combination. There are many spectacular cities in Europe but the combination of this unique city and the incredible nature is not so easy to find.

So where do Armenians go when they emigrate?

The USA and Russia and the two most popular destinations. There are around 600,000 living in Los Angeles alone and another half a million in France. Germany is also a popular destination for ex-pats. Around 2.5 million live in Armenia, but in the US and Russia live 4 million ex-pats. It is estimated that the diaspora is three times bigger than the actual population. But in Dubrovnik only two, well four at the moment as my mother and father are visiting us.

What do you miss the most about home and was it difficult to adapt to life in Croatia?

Actually I very rarely go back to Armenia, the last time was seven years ago. I miss my good friend who I met whilst I was doing my military service. My parents come almost every year and they stay for a few months. Of course at the beginning I missed some foods from home. But now I have become accustomed to the cuisine here and I love the seafood and fish. One of the things that was difficult to find was accommodation. I think I have changed my address six or seven times in Croatia, now I have finally found an apartment for a long-term rent and I am more relaxed. Accommodation, or the lack of it, in Dubrovnik is certainly challenging.

Getting used to a new way of working must have been a challenge for you, how long did it take you to get up and running and what were the most difficult moments? We have heard of many satisfied patients you have treated.

Yes, I think working in any country that isn’t your home has certain trials. To be successful the employee must be flexible and be able to not only adapt but also accept his or her new working environment. If you continually compare your working life in a new country and home then you will lose time and energy. If you are prepared to work, and work hard, then the journey will be much easier. Of course I had new barriers in my way, such as learning a new language, and without learning the language there is no way that I could live or work in Croatia. I am now a specialist of general surgery and am very happy in my position.

Is it possible to compare Croatia and Armenia?

There are some similarities, both cultures and both people have a welcoming and friendly feel. I would say that the two mentalities are also similar but democracy and freedom of speech are much more developed in Croatia.

What were the reactions of your friends and family when you told them you were going to live in Croatia?

They joked “See you on the Adriatic.” Armenia is a football mad country and many remember Croatia at the 1996 European Football Championships in England, and then 1998 and the World Cup in France. Davor Suker is a household name in Armenia.

Where is home for you now?

My home is now Croatia, but year after year I can see myself slowly becoming a citizen of the world and I think now that my home is this planet.