MARIJA MILOVAC – Ghosts and mysteries: Haunted Dubrovnik shows you a different side of the City

Imagine your Dubrovnik tour starting at sunset, with your guide waiting for you with lantern in a long, black hooded dress. Marija Milovac became a Dubrovnik attraction when she started her Haunted Dubrovnik tours. Mysterious stories, secrets, legends - Dubrovnik history is full of them and they are just waiting to be discovered. You just need to be brave – some of them might scare you!

How did you get the idea for Haunted Dubrovnik?

Were you scared about making something completely new?

Sure, I was really afraid. I knew that this was a big risk, but I told myself that I just have to try it and see what happens. I am a ‘’normal’’ tourist guide, I do regular and Game of Thrones tours too, so in the worst case scenario I would continue doing that – which is not that bad either.

So you like being a tourist guide?
I love it! I just love this city and I have really found myself in this job. I can work with any type of guests and I enjoy doing what I do.

Did the amount of interest for your new tour surprise you?

Yes. You always hope for the best, but it still was a great surprise. Now it’s starting to be ‘’a real thing’’. People are booking tours, I have many inquires, so it’s really great.

What do you offer to tourists?

A mix of stories! Ghosts, legends of our city, some darker stories, such as executions in the time of Dubrovnik Republic, Lokrum legends, folklore stories... Mostly mysterious themes and topics. 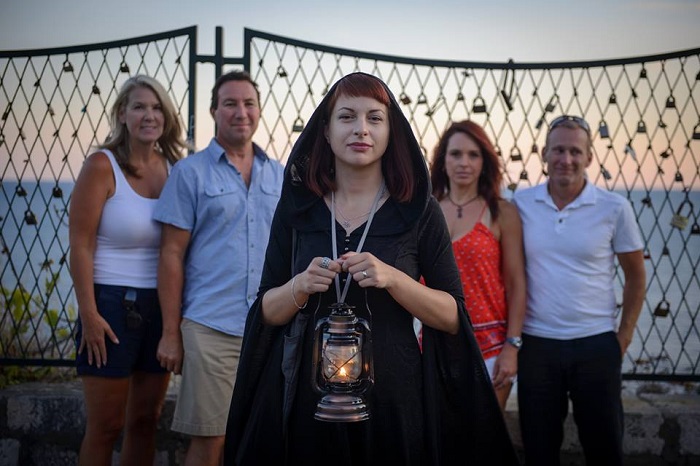 What types of guests are interested in your tours?

It’s hard to tell. There are people from various age groups and styles of life. Once I even had children on my tour! Honestly, I was a bit worried about them coping with some topics. But their parents told me that I can talk about anything. That tour went surprisingly well, since children can sometimes be more demanding, as they easily get bored and roll their eyes, which makes me nervous to begin with. But they were really interested and enjoyed it! That made me realise that the tour is really good.

You have a special costume for the tour? How did you think of that?

I wanted it to match the tour. I wear a long black hooded dress and have a lantern to light the way for my guests. It creates a mystical atmosphere.

Do people around react since you must be an unusual sight?

Well, yes. Since I start my tour at Boninovo, a place famous for people committing suicide by jumping to the sea, I had one funny situation. I was waiting for my guests couple of nights in a row and one local gentleman saw me there every day. One night he stopped and asked me if I was fine, he was really worried.
Sometimes people look at me like I’m some sort of weirdo, but now they heard for my tours so they usually congratulate me and tell me that they love the idea.

How did your colleagues react?

They mostly said that this is a great idea. Some of them went on my tour and loved it and told me that they will recommend it to their friends and guests.

Did you have some interesting guests?

Yes, of course. I usually ask them some questions and discover things about them. One night I was taking one couple from Scotland on the tour, they wanted it to be private. I was telling them about masons in Dubrovnik and after few stops he admitted that he’s a member of masonry lodge in Scotland. Since I am telling a story about one mason from Dubrovnik that told all the secrets from the lodge, he said that the punishment would be ripping his heart from his chest. A bit scary! But I love to hear some new, interesting stories, so I have fun on my tours too. 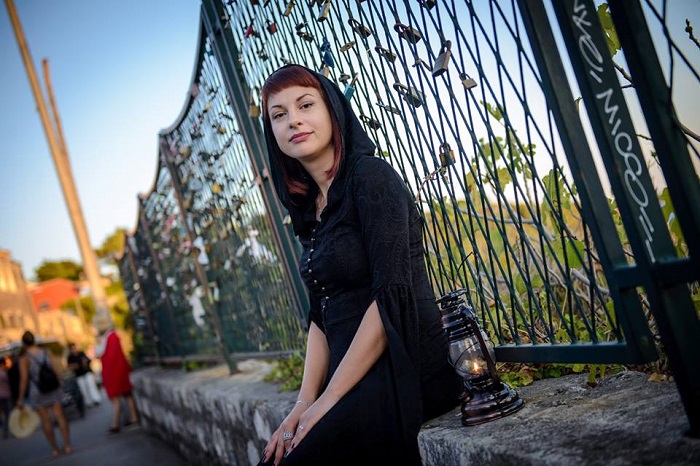 Where do you find your stories?

Mostly from Dubrovnik authors, like Tereza Buconic Govic, Marko Margaritoni and other less famous authors. But let’s keep it a secret!

Which locations do you visit during your tour?

The first part of the tour is at Boninovo, over the graveyard, in front of Palace Skocibuha, old hospital, park Gradac, Pile and I end the tour in front of the Klarisa monastery.

Your tour is practically for everybody?

Yes and it’s much more bearable than for example the City Walls, where they need to climb a lot of steps. It’s important that people are curious and want to discover new, unusual things.

Do you have some future plans?

Of course, I have one great colleague and friend, with whom I have some excellent plans for next year. We are planning to start a new tour, also not typical for Dubrovnik and we hope that it will be successful. We’ll see what happens!